What is an upper eyelid superior sulcus?

Unwanted hollows or recesses of the upper eyelid, below the bony orbital rim. A sunken appearance in this area is termed a “sulcus deformity” and can lend an overly aged or skeletonized appearance.

Upper eyelid hollows associated with surgery can be avoided if the upper eyelid fat pads are left untouched or are conservatively shaped during upper blepharoplasty. Over-resection of fat can lead to the sulcus deformity. In most cases, a full-appearing or even slightly fatty upper eyelid is more youthful than a sunken upper eyelid.

How it is treated

A concavity of the upper eyelids is improved with the addition of a substance to restore volume and shape. Acceptable materials include injectable dermal fillers and autologous fat.

Injections of saline are sometimes helpful in temporarily “testing” how the addition of volume will potentially alter the appearance of the upper eyelid.

Hyaluronic acid-based fillers are composed of a gel and can be administered by injection. Examples of hyaluronic fillers that are used around the eyes include Restylane and Belotero. To improve an upper eyelid sulcus, the filler is injected along the rim of bone above the eyelid. The filler is placed deeply to avoid lumpiness.  A cannula is often used for safety and to prevent bruising.

A person’s own fat can be used as a natural filler. For upper eyelid hollows, fat can be injected in threads, surgically placed as free fat pearls, or surgically placed as a dermis-fat graft. Fat injections are the most common of the three, and typically fat is harvested from the waist or hips using a liposuction technique. Transferred fat can be considered a permanent filler, although there may be some unpredictability in fat survival in its new location.

Transferred fat may be placed just under the skin below the eyebrow, or it may be carefully placed beneath the orbital septum, the sheath that separates the inside of the bony eye socket from the front of the eyelids.

Hollow eyelids are typically caused by volume deficiency from inside the orbit, so adding orbital volume can improve this condition where it occurs. Implants placed inside the orbit can similarly address this issue.

A concavity associated with fractures of the orbital bones is corrected by addressing the underlying structural abnormality. 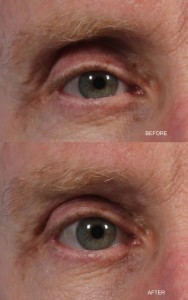 Before and after Restylane injection to upper eyelid sulcus

Before and after filler injection to upper eyelid sulcus

Before and after blepharoplasty with fat grafting to hollow upper eyelids

Before and after upper eyelid filler for hollowing after blepharoplasty