What is eyelid ptosis?

The resting position of one or both upper eyelids is low, as defined by the height of the eyelid margin.

What causes a droopy eyelid?

Eyelid ptosis may be present at birth or it can develop later in life.

The form of eyelid ptosis seen at birth (congenital ptosis) is most often caused by non-development of the muscle that lifts the eyelid (levator palpabrae superioris muscle). In this type of droopy upper eyelid, the muscle usually doesn’t function well. Some forms of congenital eyelid ptosis are accompanied by jaw-winking (Marcus-Gunn phenomenon) where movement of the mouth causes fluctuations in the eyelid position due to a cross-wiring of the motor nerves.

Eyelid ptosis that develops later in life can be categorized as acquired ptosis. There are different subtypes of acquired ptosis, but the most common form is caused by a disinsertion of the muscle tendon (levator aponeurosis) that helps to lift the upper eyelid. This may be related to long-term contact lens wear (especially hard lenses), repetitive eyelid rubbing, an injury to the eyelid, or it may just happen without a specific cause. In this type of eyelid ptosis, the eyelid lifting muscle usually works well.

Botulinum toxin injections (Botox, Dysport, Xeomin) can cause a droopy eyelid if the injection affects the eyelid lifting muscle. This is a rare, temporary side effect.

Other forms of eyelid ptosis

There are other reasons for a droopy eyelid that are less commonly seen, including medical conditions such as cranial nerve III palsy, Horner’s syndrome, Myasthenia gravis, temporal arteritis, orbital apex syndrome, and blepharophimosis syndrome.

Not to be confused with

The eyelid appears droopy, with the edge of the lid (where the eyelashes reside) lower than normal. The eyelid may approach the level of the pupil, or it may cross the pupil, interfering with your vision.

You may have horizontal forehead creases or raised eyebrows if you are contracting the forehead muscle to raise the brows in order to compensate for a droopy eyelid.

You may tend to raise your chin (a chin-up position) in order to have a better line of vision.

With acquired eyelid ptosis, there may be a hollowing (sulcus) in the upper eyelid, below the brow, and the upper eyelid crease may be higher than normal. The eyelid skin may also appear to be thinner, and in some cases the color of the iris can be seen through a closed eyelid!

With congenital ptosis, the upper eyelid crease may be absent, and there may be poor movement of the upper eyelid when you attempt to look up. When you look downward, the eyelid may not close completely.

The degree of severity of eyelid ptosis can vary. Some people may only have 1 or 2 millimeters of droop, while others may have severe ptosis where the eyelid appears to be nearly closed. 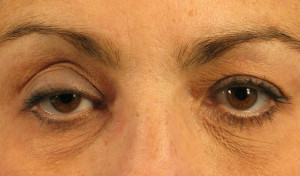